This area borders Lake Erie, southern Michigan, and eastern Indiana. Some areas in northwestern Ohio are also considered the Black Swamp area. The Toledo metropolitan area is also part of the region. Just like any other region, there is no universally agreed-upon boundary for northwestern Ohio, as the entire area is defined differently by the opinions of multiple people.

What is considered to be Northwest Ohio, with the dark-blue colored counties always included, the middle shade of blue counties are included some of the time, and the lightest colored blue counties being included the least. The lighter the shade, the more debatable it is. The city of Toledo serves as the principal city for the region of Northwest Ohio.Though Toledo is an industrial city, the region is primarily agriculture with relatively small centers of commerce in various locations. In recent years, Lucas County (i.e 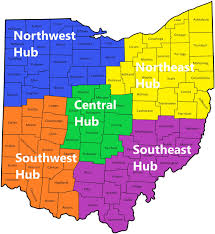 Much of Northwest Ohio was known as “The Breat Black Swamp Area” until the mid-19th century when the swamp was drained and the land was reclaimed as fertile farmland.