TIRED OF THE ORDINARY? CHECK OUT WISCONSIN’S QUIRKY MUSEUMS AND GET THE STORIES BEHIND THE STORIES.

Whether it’s mustard, accordions, or angels, the locals have a unique way of taking a hobby and turning it into an exhibit hall. Wisconsin is home to various museums that go beyond the ordinary and are the product of a passionate person with a vision; a vision so strong that erecting a museum is quite simply the most reasonable option.Spend a fun day indoors exploring the following:
If rocks could talk: House on the Rock, Spring Green
No words can truly describe House on the Rock in its entirety, but we’ll try. This classic Wisconsin museum features hundreds of eclectic displays and out-of-the-ordinary collections. The world’s largest carousel, standing 35 feet tall and illuminated with more than 20,000 lights, is a rare masterpiece. Another spectacular display is the daring Infinity Room, a glass-walled structure that projects 218 feet over the Wyoming Valley, which lies 156 feet below. There’s also a giant sea creature longer than the Statue of Liberty. This is definately a “see it to believe it” destination.
Wisconsin Automotive Museum, Hartford

Go from zero to amazed in three seconds at this museum.
Dale Anderson is the driving force behind this facility. Twenty-six years ago, Dale, with the help of the community, opened the museum to showcase the city’s history and connection with car making. The Kissel, a high caliber custom automobile was A 1920 Kissel Speedster nicknamed “Goldbug” manufactured in Hartford from 1906 to 1931. Of the 35,000 produced, only 200 exist today and many are on display here. But you won’t just see cars here, you’ll see trucks, an airplane and even a 250-ton operating steam locomotive – with tracks that run right into the building! Wisconsin car enthusiasts will also appreciate the display on the Nash, a car manufactured in Kenosha in the early 1900s. In fact, there is no other Nash museum in the U.S.
International Snowmobile Hall of Fame, Eagle River
Though we can’t take credit for inventing snow, we can take credit for inventing the coolest thing to do in the snow. Snowmobiling has deep roots in Wisconsin, which is why it comes as no surprise that this state is home to two snowmobile halls of fame and museums. The International Snowmobile Hall of Fame in Eagle River showcases the sport’s history and the people who have helped make snowmobiling one of the world’s premier winter sports. And the museum is located where else? That’s right, Eagle River. None other than The Snowmobile Capital of the World and just a stone’s throw (literally it’s 200 feet!) from The World Championship Snowmobile Derby.  Visitors to the museum can take a self-guided tour that includes vintage sleds and groomers like the 1953 Ellison all the way to the high tech models of today.
World of Accordions, Superior

Whether it’s polka music or simply the romantic tune of “That’s Amore,” there is nothing quite like an accordion to turn a song from “nice” to unforgettable. Walk into the World of Accordions museum in Superior and you’ll see how these “squeeze boxes” have transformed throughout the years. Helmi Harrington is the living and breathing force behind the World of Accordions. At her Harrington Arts Center in Superior, she maintains the museum, repair shop, technicians’ school and concert hall focused solely on the accordion. This is the world’s largest collection of accordion family instruments and cultural artifacts. But the music doesn’t stop there. The accordion repair school is the only one in the U.S. and the AccordionConcertina Hall, which was once a church altar, is now the stage for accordion performances. Scholars from as far as Austria have come to use the museum’s archives. If you visit, you may be lucky enough to receive a short performance from Helmi herself.
Bergstrom-Mahler Museum, Neenah
Hobbies come in all shapes, sizes and weights. At 10-years-old, Evangeline Hoysradt took an interest in a unique paperweight her grandmother owned. When her grandmother passed, the paperweight was given to another family member and forgotten. Years later at an antique show, Evangeline spotted a paperweight that looked just like it – no it wasn’t her grandmother’s, but it inspired her. Six-hundred and fifty-two paperweights later, she became a renowned expert. Her collection in the early 1940s was shown in exhibits across the country and today, can be seen in the now 3,000 piece collection at the Bergstrom-Mahler Museum in Neenah. In addition to having the world’s most representative collection of paperweights, the museum has four permanent glass collections, a collection of Germanic drinking vessels and offers glass blowing Bergstrom-Mahler Museum in Neenah
Wally Keller Tool Museum, Mt. Horeb
This museum really hits the nail on the head when it comes to unique. Wally Keller, a Mt. Horeb folk artist and sculptor, amassed a collection of over 3,000 hand tools dating back to the 1800s through the 1960s. Duluth Trading Company owner Steve Schlecht recognized the value in such a collection and the story it told about the history and ingenuity of America’s working man. He put the tools on display at the Mt. Horeb Duluth Trading Company flagship store. You’ll see hundreds of different wrenches, hand tools, unique railroad tools, tools used for wagons and buggies, woodworking and much more. And Wally was a pretty sharp guy himself; he knew how to use every tool in his 3,147-piece collection!
National Mustard Museum, Middleton 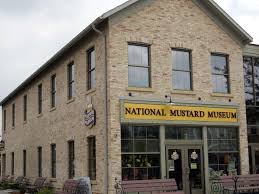 Standing in an all-night supermarket looking for the meaning of life, National Mustard Museum founder and curator Barry Levinson heard a voice, “If you collect us, they will come.” That experience led to this most improbable museum, and a museum which now houses more condiments than you ever thought possible. Levinson has amassed more than 5,600 mustard varieties from 50 states and 70 countries. The museum is also home to hundreds of items of great mustard historical importance, including mustard pots and vintage mustard advertisements. Visitors can purchase mustard off the shelves at the museum, or from the first ever mustard vending machine. The museum also includes a tasting bar with free samples. The best part – admission to this wacky museum is free. And Barry or Mrs. Mustard (aka Patty, Barry’s lovely wife) may be around to give a tour.
Castle Rock Museum, Alma
For a rare look at some of the most intricate and artistically fascinating armor out there, a Renaissance fair just doesn’t cut it. You really need to visit the Castle Rock Museum in Alma. It all began when Gary Schlosstein, at age 10, acquired a Civil War musket for $3. Now his museum, which arose out of his personal collection and lifelong pursuit of historical weaponry, is the most complete arms and armor display in the Midwest. The museum takes you through 2,000 years of history and hundreds of pieces of arms and armor. Start with Rome, make your way through the Dark Ages, Crusades and the Renaissance. You’ll be an expert by the time you leave the museum — a real knight in shining armor.
Angel Museum, Beloit
Every time a bell rings in this museum of 11,000 angel figurines, you can only imagine what happens. A love affair with an Italian bisque angel discovered in Florida by Joyce Berg was the impetus that began the world’s largest angel figurine collection. Housed in St. Paul Catholic Church in Beloit, today the Berg Collection has over 13,600 angels in its collection – 11,000 on public display. Ranging from one-eighth-inch to full-sized, the angels are made in over 100 different materials from fine porcelain to macaroni. The museum also features a collection of 600 African American angels donated by Oprah Winfrey, who was given the angels by her fans.

Dynamic Duos: Art of Collaboration April 8-May 28/FISH CREEK – The Guenzel Gallery at the Peninsula School of Art. An exhibit for artists who work as pairs. The gallery and opening receptions are free and open to the public. the Guenzel Gallery displays themed exhibitions of nationally recognized artists’ works throughout the year. These exhibitions celebrate both process and finished work, …

Eric Church July 16/TWIN LAKES – Superstar Eric Church has been added to the Country Thunder lineup along with Blake Shelton, Kane Brown and Dusin Lynch as headliners. This event will be held rain or shine. Single day admission is available or come for the whole festival. Four – day general admission is $200 and includes all events. Single day …