Waterways were the earliest transportation routes on this continent. Early explorations and subsequent settlements were on, or had easy access to, the rivers. The city of St. Louis looms large in history because it follows this pattern.

St. Louis rises approximately 200-ft. over the western shore of the Mississippi with the Missouri River to the north and the Meramec River to the south.

The first documentation of the area appears on a map in the journal of Father Jacques Marquette. He and Joliet named the land Missouri after a Sioux tribe they met there. It means “town of the big canoes” indicating the importance of the rivers to the indigenous people. 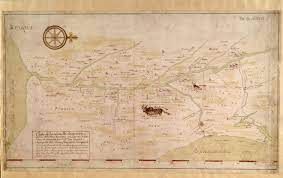 The United States doubled the country’s size when it purchased 828,000 sq. miles, for $15,000,000, in 1803 from the French First Republic. The purchase was made possible because of Napoleon’s inability to regain control of Saint-Domingue, now Haiti. The Haitian slave uprising began in 1791 and drained French monetary and manpower resources substantially. Once purchased, Jefferson immediately arranged for the exploration, inventory and documentation of the new territory.

The Corps of Discovery, led by William Lewis and Meriwether Clark, began at the confluence of the country’s two largest rivers, the Mississippi and Missouri. Clark’s slave York accompanied them, and the total permanent party of explorers numbered 33. They embarked on May 14, 1804, and their journey covered 8,000-miles in 28 months. Sacagawea, a pregnant, 16-year-old Shoshone Indian, joined them as a guide. The Corps returned to St. Louis on September 23, 1806.   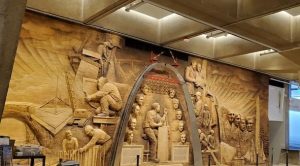 Jefferson National Expansion Memorial, familiarly known as the Gateway Arch, was built in 1963 at a cost of $13 million. The 630-ft., stainless steel, inverted catenary is situated on 91-acres that was the original settlement. The Arch rests atop the site of Pierre Laclede’s home and trading post. Activities include a 4-minute tram ride to the top of the Arch, where 32 windows provide spectacular views, a movie, Riverfront Cruise, 15 x 45-foot Tucker Theater Brick Mural and a recently renovated museum that recounts the history of St. Louis from pre-colonization through videos, artifacts and dioramas.

The Justice Department filed a discrimination suit against the St. Louis AFL-CIO in 1966. African American workers and companies were not being hired. As a result, black firms were hired to assist in completing the monument and hiring practices were altered countrywide. 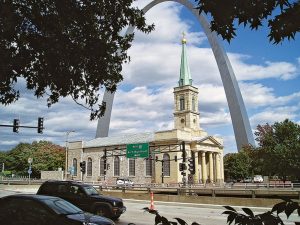 Originally the Old Cathedral was a 1770 log building. It was enlarged in 1776 and the current church was constructed in 1831. The cathedral is now 136-ft long, 84-ft wide and has a 122-ft octagonal steeple. A black stonemason, William Johnson, placed the final stone in the steeple because the other stonemasons refused the dangerous job. There was segregated seating for blacks during services, but the cathedral defied existing law to educate blacks. The earliest records of enslaved and free blacks in the city are found in the church archives. The museum is open by appointment.  

St. Louis’ legal history has altered the course of American politics and, some believe led directly to the Civil War. The controversy over the admission of Missouri, the first divisive national issue, as a slave state would have created a congressional imbalance. A debate on March 6, 1820, led to the Missouri Compromise allowing Maine to enter the Union as a free state and Missouri as a slave state. A provision stated that in the remainder of the Louisiana Purchase north of latitude 36° 30’ slavery was forever banned.

The Old Courthouse is the famous site of the Dred and Harriet Scott Case.

They sued for their freedom in 1846 in the St. Louis Circuit Court. Their suit was based on an 1824 decision by the Missouri Supreme Court stating, “once free always free”. Their owner had taken them to Wisconsin, a free state, to live. Later he returned them to Missouri. When a slave filed a freedom suit, he was placed in custody and a bond was paid. The court then hired out the slave with wages going to the owner if the suit was lost. The case went through several trials until The US Supreme Court ruled against them in 1856. Chief Justice Taney wrote that blacks had no rights, could never be citizens and the Louisiana Purchase’s provision in the Missouri Compromise was illegal. Under a new owner Dred Scott was freed in 1857, he died in 1858. The courtroom used in the case has been restored and a statue of the Scotts is on the exterior.

The Old Courthouse held slave sales on the steps until 1861. A crowd of about 2,000 hecklers disrupted the final sale 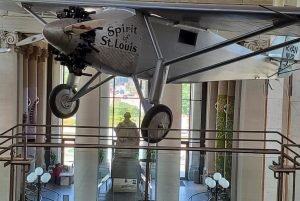 The Missouri History Museum is a gem waiting to be discovered.  A portion of the building was the Jefferson Memorial Building, first national monument to Thomas Jefferson. It was constructed with money from the 1904 World’s Fair. Exhibit highlights include the 1928 Spirit of St. Louis’ sister plane. The 2,850-lb wooden airplane is covered with fabric and suspended 18-ft above the Grand Hall. It was made for the Jimmy Stewart “Spirit of St. Louis” movie.  

St. Louis was a cultural crossroad and nowhere is that better explored than the Missouri History Museum. Currently a special exhibit, “St. Louis Sound”, is on view until January 22, 2023. The 6,000-ft. exhibit features 200 artifacts, audio stations, videos and interactive displays. Gallery highlights range from Chuck Berry’s guitar to Tina Turner’s dress. The exhibit covers ragtime, blues, jazz and country from the early 1800s until now and how St. Louis artists have had an international impact on music. 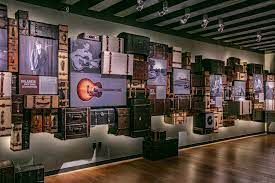 The National Blues Museum presents and preserves the historic legacy of the Blues. It presents the Blues historically, by genre and styles as well as recognizing individual musicians. Excellent videos move the stories along.

The Delmar Loop neighborhood has several significant sites all within a short distance. An 8-ft. tall statue of Chuck Berry stands vigil over The Loop while playing his Gibson guitar. Directly across the street is the iconic Blueberry Hill Restaurant & Music Club. The restaurant has an enormous, award-winning, menu and one could spend hours looking at the memorabilia and playing pinball and video games. Best of all, you can find your thrill 365 days a year. Just outside the door you will find the St. Louis Walk of Fame. 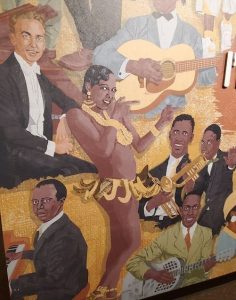 Scott Joplin, “Father of Ragtime”, lived in St. Louis from 1900-07, considered his most productive period. He supplemented his writing by playing in bordellos, clubs and saloons. He moved into an upstairs flat, now a State Historic site and museum. The first floor has displays on his life and music career. The second level is outfitted, as his home would have been. Guided tours are available and end with a timeline of his life and a mini concert on a player piano. After a three-month stay Joplin died in Manhattan State Hospital in 1917. He was 48.  

The Missouri African American Heritage Trail includes many unique sites. Lynch’s Slave Pen was on Locust Street. Lynch converted a row house into a slave holding place. Some of the cells were underground and had bare floors and a bench. During the Civil War the Union took over the building and used it to hold Confederate POWs. The facility stood until 1963. 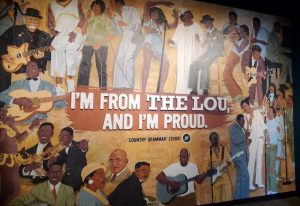 Elizabeth Keckley lived at 5 North 5th Street. As a slave she was a seamstress and by 1855 she had saved enough to purchase her freedom and that of her son for $1,200, now $44,000. She moved to DC to teach school and sew for wealthy women. She eventually became Mary Todd Lincoln’s dressmaker and confidant.

St. Louis provides a unique lens through which to view the country’s legacy.  #explorestlouis 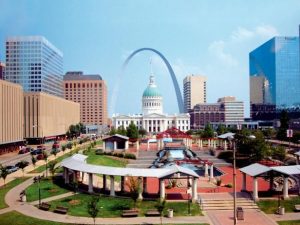 Waterways were the earliest transportation routes on this continent. Early explorations and…