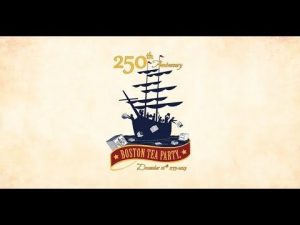 PRNewswire/- The 250th Anniversary of the Boston Tea Party, the “single most important event leading up to the American Revolution,” will occur on Saturday, December 16, 2023.  Boston will not only be the FIRST to mark the 250th anniversary of a landmark historic event in the United States’ journey to independence and the founding of a free nation, but also will be the epicenter, and on the world’s stage, in honoring the anniversary of the historic event that is the Boston Tea Party. 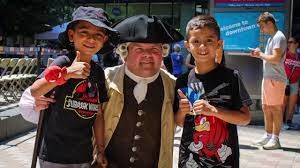 “The Boston Tea Party helped spark the Revolutionary War and is one of the earliest milestones on the path to our nation’s founding,” says Rosie Rios, Chair of the United States Semiquincentennial Commission. “It was a dramatic demonstration of the colonists’ willingness to fight for truths they knew to be self-evident — that we all have the unalienable right to life, liberty, and the pursuit of happiness. As we approach the nation’s semiquincentennial — the 250th commemoration of when our leaders firmly established those beliefs through the Declaration of Independence — it is crucial that we recognize the vital role the Boston Tea Party played in shaping the America we know today.”

Boston will be in the spotlight in honoring this historic event officially launching a commemorative year of celebrations today and will be leading the way as America begins to celebrate all major historic 250th anniversaries leading up to 2026, the semiquincentennial of the signing of the Declaration of Independence and the founding of the United States of America.

According to Martha Sheridan, Executive Director, Meet Boston and 250th Boston Tea Party Anniversary BOA Co-Chair, “The 250th anniversary of the Boston Tea Party will be a spectacular commemorative event. It will have a profound impact on our industry and the greater Boston economy during a critical time of year. As our nation approaches its 250th birthday in 2026, it’s fitting that Boston should be in the global spotlight as we celebrate the catalytic events that led to American independence, starting with the singular significance of the Boston Tea Party.” 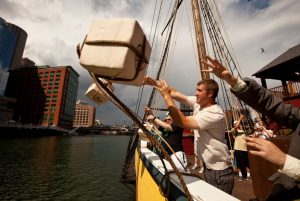 A multitude of organizations across Boston and the Commonwealth of Massachusetts are working together to create a commemorative year of public engagement, dynamic programming, special exhibits, events, installations, and performances. The year will culminate in a grand-scale, live reenactment of the Boston Tea Party on December 16, 2023, slated to be one of the largest theatrical moving performances in the United States.

“The Greater Boston Chamber of Commerce and our members are enthusiastic partners and collaborators in the celebration of the Boston Tea Party’s 250th anniversary,” says James E. Rooney, President & CEO of the Greater Boston Chamber of Commerce and 250th Boston Tea Party Anniversary BOA Co-Chair. “Boston holds momentous history that is pivotal in the country’s journey to realizing freedom. This is a celebration for everyone in Greater Boston – and the country and world – as we commemorate the courage and grit that connects every community to this revolution that changed the course of history.”

An overview of current initiatives as part of the 250th Boston Tea Party Anniversary Commemorative Year:

In addition, a newly launched Historic Tours of America trolley, fully wrapped depicting the Eleanor, one of the three ships that were part of the Boston Tea Party, will be launching a tour of the Commonwealth of Massachusetts beginning in Spring 2023 to collect loose-leaf tea from citizens across the state. This schedule will be announced in early 2023.

NEW Boston Tea Party Descendants Program
A NEW Boston Tea Party Descendants program will be launching in 2023 in partnership with the New England Historic Genealogical Society, the country’s leading resource for historical family research, fostering genealogical connections to participants in the Boston Tea Party, their families, and those involved in the making of colonial rebellion in Boston.  The program will not only connect people to their shared histories, but also serve as a hub of information and shared resources for local, national, and international historians, indefinitely. More details to be announced in early 2023.

41st Boston Harborfest – June 29 – July 4, 2023
Boston Harborfest is the country’s largest Fourth of July festival. During the 41st Harborfest in 2023, the Boston Tea Party will be the featured theme as Boston celebrates its historic harbor and history. The Boston Tea Party Ships & Museum, dedicated to accurately reliving and representing a key time in history (1773-1775), will be offering a series of hands-on activities & interactive performances throughout Harborfest.

Engaging Students Throughout Commonwealth of Massachusetts
Throughout the 250th Anniversary of the Boston Tea Party’s commemorative year, students across the Commonwealth of Massachusetts are invited to express their personal thoughts and connections to the themes centered around the ideas of the Boston Tea Party — protest, civic engagement, representation and commemoration — through creative writing projects, videography, or artistic design. The goal is to not only educate students on the iconic events that helped shape America, but also allow them to connect these ideals to their own lives. Their creative pieces will be showcased on www.bostonteaparty250.com. More details to be announced in early 2023.

Boston Area Hotels, Restaurant and Bars to Honor the Boston Tea Party
Throughout 2023, Boston area hotels, restaurants and bars will be offering a dose of patriotism with hotel packages, tea-inspired cocktails, and dinners in honor of 250th Anniversary of The Boston Tea Party. More details to be announced in 2023.

Honoring 18th-Century Poet Phillis Wheatley
Former enslaved person and American author, Phillis Wheatley, is one of the best-known poets in late-18th-century America. Considered the first African American and only the third American woman author of a published book of poetry, she will be honored with a special exhibition; and a major announcement will be made in 2023 around her connection to the Boston Tea Party. More details will be announced in 2023.

Information on the 250th Boston Tea Party Anniversary commemorative year, in addition to updates on all events and programming throughout the year, will be available at www.BostonTeaParty250.com, and on social media channels: Instagram/Facebook: @bostonteaparty250; Twitter: @BOSTeaParty250.

Formed in 2013, Revolution 250 is a consortium of more than 70 organizations and individuals led by the Massachusetts Historical Society, who are connected by a commonly held belief of the value in learning about, examining, and commemorating the history of the American Revolution. These institutions represent a long-standing commitment to understanding this history and will explore the importance of America’s war for independence for years to come. Revolution 250 will commemorate the 250th anniversaries of significant people, places and events that led to the American Revolution, and the creation of such founding documents as the Declaration of Independence, the Constitution, and the Bill of Rights. These anniversaries will be integral in engaging public interest and garnering public appreciation for the pivotal role Massachusetts played in securing the independence of the United States of America. For more information, visit www.revolution250.org.