LAS VEGAS -This comedy magician will paint the town plaid when his family-friendly show opens at Excalibur Hotel & Casino.The Mac King Comedy Magic Show will perform inside the Thunderland Showroom at Excalibur Tuesday through Saturday at 1 p.m. and 3 p.m. and will be dark Sunday and Monday. Tickets are $44.95 for general admission and $54.95 for VIP, not including tax and fees.. Widely regarded as the No. 1 comedy magician working in the world today, Mac King has been a staple on the Las Vegas Strip for more than two decades. Mac will captivate audiences for 70 minutes as he casts out a fishing line over their heads and catches live goldfish out of mid-air; completes amazing stunts with a grizzly bear and his pet guinea pig “Colonel Sanders;” performs amazing sleight-of-hand; makes his head completely disappear in a paper bag, and renders himself invisible – all while remaining unbelievably funny. Because of his quick wit and extensive audience interaction, no two shows are alike. He’s had three sensational appearances on “Penn & Teller’s Fool Us” where Penn and Teller called Mac, “The greatest comedy magician at least alive today, and maybe who ever lived.” >MORE

Feb. 25-26/LAS VEGAS-Two of the most iconic names in music history are taking over Allegiant Stadium in Las Vegas for one epic weekend this February. The weekend kicks off on Friday with an unforgettable performance from one of the most influential and successful rock bands in history, Metallica, who will be joined by Greta Van Fleet. Then, one of most popular recording artists and respected entertainers in the world, Billy Joel, will perform at the stadium on Saturday. 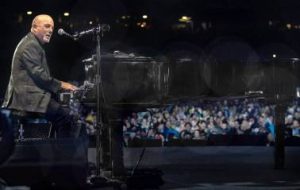 Tickets for both shows are on sale at ticketmaster. The band’s several multi-platinum albums include Kill ‘em All, Ride The Lightning, Master of Puppets, … And Justice for All, Metallica (commonly referred to as The Black Album), Load, Reload, St. Anger, Death Magnetic, and Hardwired…to Self-Destruct, released in November 2016 and charting at #1 in 32 countries. Joel has had 33 Top 40 hits and 23 GRAMMY nominations since signing his first solo recording contract in 1972.