Sure, the oil industry, medical sector and NASA remain big business, but now they share the spotlight with a crop of rising-star chefs and arts and culture groups. Most recently, the Downtown’s convention district renovation has transformed the area into a pedestrian friendly hospitality and cultural district.
Houston is one of just five U.S. cities with resident companies in all the major disciplines of the performing arts and thanks to the Museum District the city has become an internationally recognized arts center. Houston is the most diverse city in the country, and nowhere is this more evident than in its cuisine. With more than 10,000 restaurants representing flavors from over 70 countries and American regions, visitors have an array of options from fine dining and international cuisine to the typical Barbeque and Tex-Mex. In Houston you will find ethnic Chinese restaurants, fine Japanese sushi bars, -in addition to Gulf Coast seafood, Creole, Mexican, South and Central American, Cuban, Korean fare and Spanish tapas at a variety of fine restaurants—not to mention the unique creations of award winning chefs. 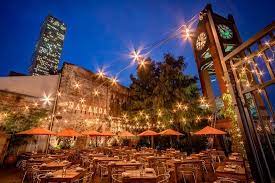 Editor’s Pick: Batanga – At 3,600 square feet, our bricked patio is the largest patio in Downtown Houston. It’s the perfect place for an evening out with friends under the patio string lights, for happy hour with your co-workers and colleagues, or for relaxing on Sunday with half off all bottles of wine all day long (excluding bubbles), having a leisurely brunch with friends, or partaking in our three-course Sunday Supper consisting of whole roasted suckling pig, local farm salad and vegetable, and Chef’s dessert.
The thriving arts, culture and culinary scene reflects the city’s diversity and makes Houston the cultural and culinary capital of the South of the United States.
This year Houston hosted Super Bowl LI at the 71,500-seat NRG Stadium, home to Houston Texans (NFL) and the annual Houston Livestock Show and Rodeo. After nine-days of fan-festivals concluding with the big game, Houston received praise by the NFL and competing teams for a job well done. During the nine-day period 1.3 million people came through the NFL Experience and Super Bowl LIVE festivals. 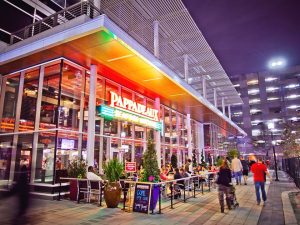 EXPERIENCE HOUSTON LIKE A LOCAL Getting around Downtown Houston is easier than ever. The Houston Downtown Management District has completed a Wayfinding Signage project both for vehicles and pedestrians that incorporate unique works of art. Explore Downtown on the free and environmentally friendly Greeenlink buses, rent a bike from the B-Cycle kiosks or simply walk. Hop on the METRORail red-line to explore the Museum District, the Houston Zoo and Hermann Park; then continue on to the Texas Medical Center and NRG Park.
TOP ATTRACTIONS Users of the Houston CityPASS can visit five attractions for nearly half of the regular price at US$56 for adults and US$46 for children ages 3-11. The Houston CityPASS includes actual tickets to NASA Space Center Houston, Downtown Aquarium and Houston Museum of Natural Science. Visitors can also choose from the two option tickets to the Houston Zoo ~or~ Museum of Fine Arts, Houston and to the Children’s Museum of Houston ~or~ Kemah Boardwalk.
SHOPPING IN HOUSTON Houston is home to a Project Runway winner and more than a dozen distinct shopping areas, with retail that goes from vintage to high-end designer, plus the always popular outlet shopping. The sophisticated River Oaks District offers high-end shops such as Chopard, Dior, Etro, Canali, Roberto Cavalli and Tom Ford. The 14-acre, mixed-use project encompasses restaurants and entertainment along with office space and luxury residential. Nearby find famous designer stores at The Galleria or exclusive boutique gems at nearby Uptown Park or Highland Village. Head to the suburbs and see what’s new at CityCentre and Baybrook Mall. Budget conscious shoppers won’t want to miss a shopping day at Katy Mills, Houston Premium Outlets or Tanger Outlets.
International shoppers can get a refund of a portion of their sales tax at Tax Free Shopping locations around the city or at Bush Intercontinental Airport, Terminals D and E. For a list of participating stores and specific requirements please visit http://taxfreetexas.com/.