How a town of 7,000 people becomes an international destination

Tucked into the Pennsylvania countryside – just about a two-hour drive from Washington, DC, and Philadelphia – lies a town with no more than a dozen or so traffic lights, a couple grocery stores, and a few downtown streets lined with charming shops, locally owned restaurants and the twice-a-day train that swings by the historic train station.
But this same small town, and the rolling countryside that surrounds it, brings in more than 3 million people annually, representing the entire continental United States and scores of foreign countries. Standing along some of the popular tourist sights – its commonplace to hear a variety of languages and accents from visitors as they marvel in a town that has made a name for itself around the world. 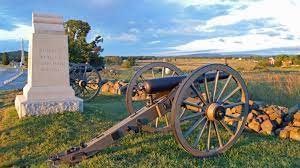 Welcome to Gettysburg, Pennsylvania – a town that ties its legacy to the fierce 1863 battle of the American Civil War that left more than 50,000 casualties and the turning point of the four-year war that tore the country in two. Gettysburg has become a symbol of both tragedy, and hope.
That hope came in the form of Abraham Lincoln, who chose this Pennsylvania town as a place to reunite the country through his immortal words – The Gettysburg Address. That simple, two-minute speech has become one of the world’s most remembered and adored.
Visitors from Europe, Asia and even Australia have found their way to Gettysburg – likely renting a car from Washington, Philadelphia or New York – making the short drive across the rural Pennsylvania countryside dotted with bank barns, corn fields and a culture unique to the Mid-Atlantic.
In Gettysburg, visitors find a town stepped in history, but a place that delivers an authentic American experience: cozy inns, historic restaurants, ice cream parlors and boutiques – all, but a few, locally owned.
Tours – both history and haunted – gather on the street corners telling stories of past and present, which museums welcome visitors eager to learn about the tragedy and triumph that happened in the streets and farms that surround this town.

In the countryside north of Gettysburg lies 20,000 acres of apple trees – one of the largest apple-growing regions in the United States. Farmers’ markets, orchards and wineries are drawing visitors from the town and bringing them out into the hills for a unique blend of culinary experiences.
International visitors are drawn by the history, no doubt, but are in awe of the spirit, the culture, and the way of life that this small town celebrates.
In 2013, when the town commemorated the 150th Anniversaries of both the Battle of Gettysburg and Lincoln’s famous speech, the town welcomed both visitors and journalists from around the world – The United Kingdom, Canada, Germany, Spain, Australia and France, among others.
Its history is world-famous, but its reputation as a destination where people come to learn, to reflect and to enjoy America, is what continues to attract international visitors. 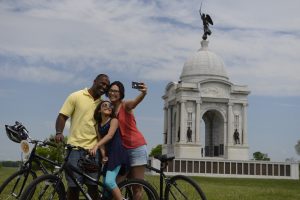 How a town of 7,000 people becomes an international destination