On The Turquoise Trail

On the scenic road from Santa Fe to Albuquerque, closer to Santa Fe,  It is home to Mary’s Bar,  Casa Grande Trading Post, Mining Museum & Petting Zoo, William Skrips studio, a children’s park, Historical Society, Post Office and Health Center, Broken Saddle stables and Cerrillos Hills State Park with 5 miles of hiking, biking and riding trails.
Six hundred years ago, before the arrival of the Europeans, Cerrillos was the land of the Keres and Tano Indians. The Keres and Tano lived in agricultural villages and cities, the evidence of which is spread out widely throughout the Galisteo Basin. The archaeology shows that some Coalition and Classic Basin (1250 AD – 1680 AD) villages were occupied by a few dozen people, and others by thousands. The tumbled rocks, scattered potsherds and discarded stone tools are the clues archaeologists use to reconstruct life in the Basin.
Mining Museum

The Mining Museum contains artifacts from the American Old West and Cerrillos Mining District with examples of rare Cerrillos turquoise on display and for sale. There are cardboard cutouts of characters from the film Young Guns and information on other movies which were filmed in and around Cerrillos. Volunteers with Santa Fe Botanical Garden offer docent led tours in the Ortiz Mountains Educational Preserve south of town.
Mining District
At this moment in time the southern part of the mining district has become a State Park, 1125-acres large. There are 5 miles of hiking trails. On your hike you will see many of the mines reclamated with netting and viewing platforms. The mines are labeled with who, what and when signs telling the history of the mine. In the reclaimed project done by the  Abandoned Mine Land Bureau (AML), many of the holes were filled in, to within 10 ft deep so a person could crawl back out. Some of the mines were foam plugged; many netted and all made safe for the public. Most of the mines are territorial mines (before Statehood) and it is well worth hiking to see them. Silver, Copper, Manganese, Iron, Galena and Gold mines exist in the park.
The Movies

The dirt streets and buildings of First and Main are the most popular locations for filming. In the spring of 1988 construction started for the feature film Young Guns. It took 3 weeks to build sets for town scenes. Forty-five town residents were hired as extra’s, painters & carpenters. Many were invited to the Santa Fe premier and Mary Mora was escorted to the gala in a limousine.  Mary’s Bar was the place to hide in John Carpenter’s Vampires and portions of Convoy were shot along Hwy 14, between Madrid and Garden of the Gods.  Made for TV “Sparks” filmed in the Simoni Building and the Casa Grande Trading Post was used for an AT&T commercial with Santa Domingo member Leo Coriz even though they didn’t have a telephone hook up at the time. Another commercial there gave cases of salsa as benefits. Scenes for The Hitcher and Seal Team Six: The Raid on Osama Bin Laden were done on CR 57 west of town. Several scenes for the Longmire pilot was filmed in Cerrillos and dust raised from the dirt streets is now infamous. In 2012, the school house property and San Marcos arroyo were used for the film We’re the Millers. 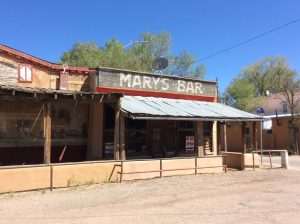 On The Turquoise Trail