Did it all start with a simple mouse? Or is there something else behind the scenes unknown to most Disney fans? Let’s take a look at the story behind the World of Walt Disney and his famous “Mickey Mouse” icon where it all really began.

Although born in Chicago, Walt moved to Marceline when he was only five years old and considered it his hometown from then on. Walt’s father Elias, along with his Uncle Mike, worked on the railroad. Walt arrived in Marceline on the train, so the first building he saw was the train depot. His love for trains carried on through his lifetime to the point he had a miniature train built in his backyard by the Walt Disney Studios’ machine shop. The Carolwood Pacific Railroad was a ​7 ¹⁄₄-inch gauge ridable miniature railroad which inspired him to include a railroad attraction surrounding his first theme park. 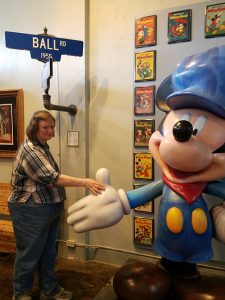 Today, it is only fitting that the museum dedicated to Disney be housed in this restored Santa Fe Depot. It was established in 2001 to help celebrate Disney’s 100th Birthday. The museum is the recipient of a unique collection of family artifacts, never seen anywhere else in the world. Many of the personal items were obtained by his sister, Ruth, upon her death.
One specific item, a hand-drawn sketch of a park Disney dreamed of building on his 40-acre Marceline farm, was found on his desk the day he passed away. Disney’s brother later made sure it was properly put into the hands of the museum and it is the only item from his office not stored in California. It is proudly displayed on the wall of the 2nd floor. 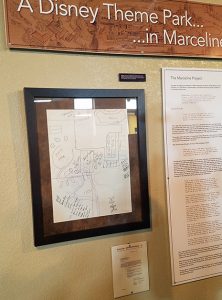 Visitors can still visit the farm. It is privately owned and so the house is not open to the public. Instead, venture a few yards behind the home and follow the well-kept path and signs to the “dreaming tree” where Disney and his sister sat and drew cartoons or created ideas for their own shows. A sapling has since replaced the original tree which fell in 2015. It is now called “the son of the dreaming tree.”

A few yards past the tree is the replica of the family barn where Disney reportedly held his first show. The story told, however, is his mother made him return all money due to the primitive nature of the show and his audience was not impressed. Disney fans are now encouraged to visit and write their names or short messages on its inside walls.
Visiting the downtown area of Marceline can help get a feel of the architecture Disney used when building the main street of his theme parks.
Also located in the downtown area is a great little family-owned restaurant called Ma Vic’s Corner Cafe. Even when Disney’s animators come to town for an event, you can rest assured they will be coming here for breakfast and/or lunch. In fact, some of the placemats from diner’s tables have been artfully designed with cartoon characters and are now framed and on display.
As you can see above, the generous helpings of homemade fries are popular and come in different styles. Whether you prefer the standard, curly cut, or wedges, they are all delicious and compliment the many sandwiches on the lunch menu.

For dessert, try a slice of pie or the famous Dusty Miller, a vanilla ice cream, marshmallow syrup, and swirled chocolate sundae with a cherry on top and sprinkled with dry malted milk. Ask your waitress about the story that goes behind this treat. You can receive a coupon for a FREE small Dusty Miller with the purchase of museum admission tickets.
Down the street from the restaurant and around the corner is the only federal building named after Walt Disney – the U.S. Post Office. 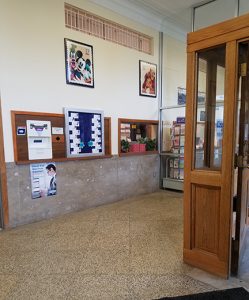 Following Walt Disney’s death in 1966, the citizens of Marceline lobbied the US Postal Service to issue a commemorative stamp in his honor In 2003, the Marceline US Post Office building was rename and was successful. Stop by the post office and have your letter hand canceled with Marceline’s one-of-a-kind Disney cancellation.
Another important building is the Walt Disney Elementary School which contains unique murals created by animators from Disney Studios. A Disney flag also graces the pole in the yard.
This quiet town full of history is a great place for an extended weekend visit. To make reservations for accommodations, there are several choices. 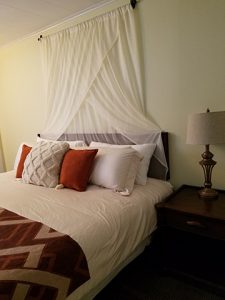 The Lamplighter Motel offers personal service and a family-friendly atmosphere. Some of the rooms are currently being remodeled with furniture from actual Disney World Resorts. Call 660-376-3517 for reservations or more information.
The Marceline Mural Motel is conveniently located right downtown among shopping and dining opportunities. They are available through www.vrbo.com.
If you prefer camping, try Lodder Up and Camp with full hookups. Check in at Ma Vic’s or Facebook.
The Circle Lodge offers a private destination for nature lovers. View at circleolodge.com
The creation of Main Street U.S.A. in Disney’s theme parks is actually a tribute to the hometowns we all want to remember as the happy place of our youth.