The Beaches are just the beginning of beauty along the coast of Delaware. Visit the historic lighthouse locations at sunrise or sunset for spectacular scenic views.

Part of the appeal lighthouses have is that they are found in some of the most beautiful settings, often on rugged coastlines dotted with conifers or on sandy beaches.  Lighthouses can also be found in the remote extremes of the country where a sunset or sunrise over a large body of water can be enjoyed in complete solitude.  A perfect viewing platform for these spectacular settings is the walkway encircling the lantern room atop the lighthouse. 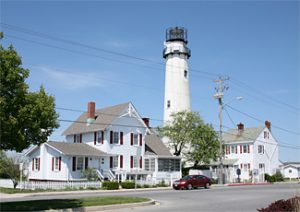 Built in the 1850s, the historic Fenwick Island Lighthouse was constructed after Congress authorized $25,000 in 1856 for its establishment. The station was completed on five acres of land and the lamp was lit for the first time on Aug. 1, 1859. The lighthouse is open to the public as follows: May, June, and September(Labor Day) Open SAT and SUN 9-12 July, August: Open FRI SAT SUN MON 9-12

Located above Sea Shell City on Route 1 in Fenwick Island, this museum offers an ever-changing exhibit that expands and diversifies with the acquisitions of new artifacts as they are recovered. The museum’s collection of shipwreck and recovered artifacts is one of the largest in the Mid-Atlantic and contains shipwreck artifacts from around the world. Its current location houses about 10,000 artifacts at all times, while the other 80 percent of the collection is rotated throughout museum exhibits around the world.

Located South of Dewey Beach on Route 1. The former Indian River Lifesaving Station was built in 1876 and is the oldest lifesaving station still in its original location on the East Coast of the United States. One of the first stations designed by the federal government, it remained open until the famed nor’easter of 1962 filled it with several feet of sand. The Delaware Seashore Preservation Foundation took over the task of restoring the station many years later with the goal of restoring it to its 1905 appearance. They accomplished that goal and reopened the historic building as a museum in 1998.

Site of the long-gone Cape Henlopen Lighthouse Located in Lewes 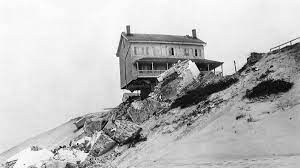 The Cape Henlopen Lighthouse sat high atop a sand dude about a quarter-mile from the ocean and 2,200 feet from the northern tip of the cape. It was built in the early 1760s using funds raised by Philadelphia ship owners and merchants, men who were fed up with losing lives and cargo as a result of shipwrecks off the Delaware coast. The original lighthouse was built more like a fortress, with walls that measured 60 feet in height and were 6 feet thick at its base. It rested 126 feet above sea level and its whale oil light could be seen for up to 17 miles, but it was built on sand not meant to withstand the daily pounding it took from the salt waters of the Atlantic. Two years after it was abandoned, in April of 1926, Mother Nature finally claimed the once mighty structure when it crumbled and fell into the sea.

Replica of the Cape Henlopen Lighthouse

Located in Rehoboth Beach. A one-third replica of the famed lighthouse today welcomes travelers to the resort town of Rehoboth Beach. Situated in the center of Rehoboth Avenue in the middle of a traffic circle, the replica provides an everlasting memory of the once-famous lighthouse.

Located in Lewes. The Overfalls is one of only 17 remaining lightships out of a total of 179 built from 1820 to 1952. Designated a National Historic Landmark in 2011, it is one of seven lightships in this country still open to the public. It now serves as one of the most picturesque parts of Lewes Harbor.

Located in Lewes. At the historic museum on Kings Highway in downtown Lewes, modeled after the Town Hall in Hoorn, the Netherlands, you can see the original door from the Cape Henlopen Lighthouse, as well as many other artifacts related to the maritime history of the “First Town in the First State.” 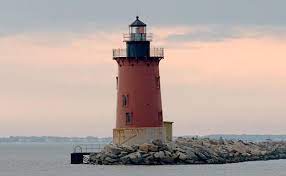 In 1884 a light was commissioned for the east end of the Delaware Breakwater. The light was built to replace the Cape Henlopen Beacon, which was rapidly deteriorating at the time and was taken out of service later that same year. Construction began in 1885 and a temporary light on a wooden frame was placed near the building site during the process. The foundation of the tower was embedded into the breakwater. The iron structure, which was listed at 56 feet tall as of 1914, was completed on Oct. 2, 1885.

The Harbor of Refuge Light (originally Harbor of Refuge West End Light, though its east end counterpart has been long since discontinued) is a lighthouse built on the ocean end of the outer Delaware Breakwater at the mouth of the Delaware Bay, just off Cape Henlopen. It was built to function with the Delaware Breakwater East End Light in order to mark the National Harbor of Refuge. In 1825, an act of Congress authorized the initial construction of a breakwater off of Cape Henlopen in order to create a harbor for ships in stormy weather. This breakwater was not completed until 1869.

The first building constructed on the Delaware Breakwater was a residence for William F. Strickland, the superintendent in charge of building the breakwater. His tiny cottage held a temporary light while the first real lighthouse was being built. The Strickland Lighthouse served as the front light for the Delaware Breakwater Range from 1881until 1902 when that task was taken over by the East End light. The Strickland site was razed by the Coast Guard in the 1950s. 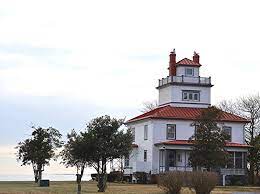 The best way for the public to view Liston Front Range Lighthouse is from Delaware River, as the lighthouse is now part of a private riverside community called Bayview Beach. If you venture out on the river, be sure and also look for the granite markers that designate the dividing line between Delaware River and Delaware Bay. Years ago, these markers both succumbed to erosion and toppled into Delaware River, but in 1983, Delaware River & Bay Authority, which operates the Cape May – Lewes Ferry and the Delaware Memorial Bridge, retrieved the monuments from the muddy river bottom and erected them on circular protective piers. Thanks to individuals interested in preserving the maritime history of Delaware River, Liston Front Range Lighthouse and the nearby granite markers, thought difficult to visit, are both now well preserved.