Circumstances are beginning to stabilize around a “new normal,” and those planning to travel continue to be mindful of safety protocols, mode of travel, affordability and accommodations. Lehigh Valley’s Bear Creek Mountain Resort meets and exceeds all these requirements as well as adding a number of notable travel experiences.

The resort is within driving distance of Washington, DC, Baltimore and New York. It is the nearest ski resort, 60-miles, to Philadelphia. The all-season resort, located in the Lehigh Valley between Blue and South Mountains, was populated pre-first contact, by the Lenni Lenape. They traveled the Great Minsi Trail, now Bethlehem Pike, as a trade route.

Europeans arrived in the Lehigh Valley in the early 1700s, traveled the trail and forcibly removed the natives from the area and in 1737 the land was ceded to Pennsylvania in the Walking Purchase. German immigrants arrived around 1743 drawn by advertisements from land agents of William Penn. Census records from 1800 indicate that of the 21 African Americans residing in the valley only one was enslaved. She was a house servant in Macungie.
Bear Creek Mountain Resort is located in Macungie, founded in 1776 on what was formerly known by the natives as Maccongy, the “feeding place of the bears.” In1857 the Rittenhouse Gap mine was established along with the 1850 Catasuaqu a-Fogelsville Railroad. The railroad carried iron ore to valley furnaces for processing. Thomas Edison spent time visiting the mine to explore developing an economical method of iron ore extraction. The mine closed in 1944. www.bcmountainresort.com
A two-trail ski area opened in 1967 as Doe Mountain Ski Resort and after new ownership in 1999, it was reborn as the 52-room, year-round, Bear Creek Mountain Resort & Conference Center. Specialty winter resort offers include 21 ski trails over 86 acres. The trails represent skill levels from beginner to the challenging Sasquatch Trail with a 50% slope. Tubing, ski rental, snowboarding, ski lessons and Mountain Trail Passes are also offered. Bear Mountain has been designated in the top ten Small Ski Area’s in both North America and the United States. 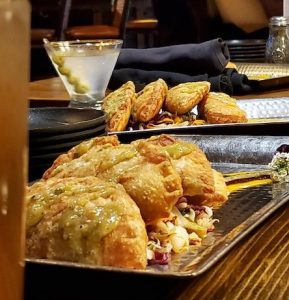 The menu of warm weather activities is even more creative and expansive. In the activity center, you can sign up for archery shooting and ax throwing, Segway tours, pond fishing and guided mountain SXS tours. SXS tours take you on the ski trails to the mountain summit and along the tracks of the mining railroad. A unique Giant Swing helps you fly through the woods and over a pond in a 90-minute session that includes lessons and flight. Children can also experience Bear Creek Mountain Camp.
The resort’s Fitness Center is fully equipped with state-of-the-art apparatus available to registered guests. Paired with on-site, full-service, spa treatments and an outdoor heated pool, stays here are immersive wellness experiences. There are two dining facilities, the Grille at Bear Creek and the Trail’s End café that are available throughout all seasons. Designed for quick bites for outdoor enthusiasts the Mountain Eatery is open during winter months only. 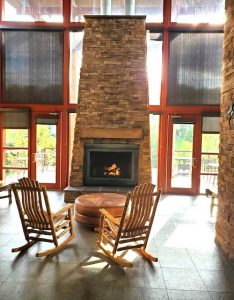 Hotel accommodations are spacious, have great views and provide amenities including WIFI, deluxe bedding and safety protocols.
Bear Mountain Creek Resort and Conference Center is a perfect destination for these times. There are numerous on-site events and activities and guests can interact with others at a level at which they feel comfortable. The resort is close enough to other sites and attractions to make it an ideal hub from which to explore the surrounding area.
Lehigh Valley is filled with unique cultural sites including Pennsylvania Dutch Country and the Moravian settled cities. This year they are honoring the International Tricentennial Moravian Trail. The trail traces their route from Hernhut, Germany to colonies in the New World. The most notable colonies in Pennsylvania, Nazareth and Bethlehem, continue to have extant sites that date from the 1740s and are open to visitors.
Bethlehem, a 30-minute drive from Bear Creek, is Bethlehem, PA, the official “Christmas City USA” since 1937 and is currently a tentative UNESCO site. The north side of the city contains the historic district and tours are offered year round. #VisitBethlehempa
Allentown, 15-miles from Bear Creek, contains a significant American Revolutionary historic site. The colonies’ Chief Justice, William Allen, founded the city in 1762. The Allen family engaged in the slave trade but divested themselves of the business in the 1770s. The enslaved they held were freed upon the death of individual family members. It is believed the final three were freed in 1778 upon the death of William’s son.
Allentown’s first church was constructed of logs in 1762. It was rebuilt of stone in 1773 and the Zion Reformed Church has stood on the original site ever since. The church, on the National Register of Historic Places, has functioned as safe haven during Indian raids, a Revolutionary War hospital and the Liberty Bell Shrine.
In 1777 George Washington was routed at Brandywine Creek leaving Philadelphia vulnerable to occupation. It was decided that 11 bells, including the Liberty Bell, should be hidden to keep them out of British hands and being used to make weapons. The bells were secreted in hay wagons and relocated at night under heavy guard to Allentown. They were hidden beneath the floorboards until June 1778.
The Liberty Bell Shrine is on the lower level of Zion Reformed Church. A replicated Liberty Bell and 46-ft. mural depicting the bell’s journey are showcased. www.Libertybellmuseum.org
Begin and end your vacation at Bear Creek Mountain Resort with lots of adventure in between. There are outstanding opportunities to stay and play as well as connect with culture at your own pace and affordable rate.