Bliss On The Bay

Galveston is a 46-mile long, 3-mile wide barrier island in the enviable position of being a destination that offers equal measures of outdoor activities, exceptional architecture, unique dining, entertainment and accommodation options, and nationally significant history. The city boasts 32 miles of gulf beaches and a 17-foot high seawall, 10.3 miles long, the longest continuous sidewalk in the country.
Situated on the main trans-Gulf migration route the island is one of the country’s premier birding destinations. At East End Lagoon Nature Preserve birders can see birds in the wetlands and tidal pools from their vehicles.
Juan de Grijalva first sighted Galveston in 1519 but it was Cabeza de Vaca’s whose party arrived on western Galveston Island, inhabited by the Karankawa, and named it “Malhado” or “Isle of Misfortune” in the 1520s. De Vaca’s journal is one of the earliest accounts of European contact in Texas.
In the 1780s Spanish navigator, José de Evia, surveyed the Gulf Coast and named the bay Galvezton 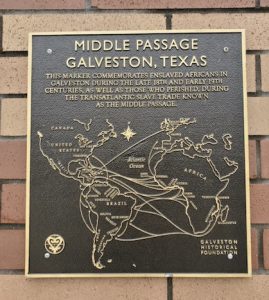 for Bernardo de Gálvez the Spanish Viceroy. Americans arrived in 1815 when Henry Perry landed 3 ships, commissioned to disrupt Spanish trade. By 1808 the Atlantic slave trade had been abolished in the US but the trade thrived around the Texas Gulf. The notorious pirate Jean Lafitte entered the trade in the region in 1817 with his base, Campeche, in Galveston.
There is evidence that Lafitte’s men kidnapped a Karankawa female and this act led to a raid on his compound. The natives were defeated by use of superior weapons. The bulk of Lafitte’s business was in African slavery. He sold to middlemen, most notably Jim Bowie, who purchased them by weight. Lafitte would also claim he “found” them, turn them over to customs and repurchase them at US government sales. This made it legal to sell them in the US. It is estimated he sold approximately 2000 slaves. 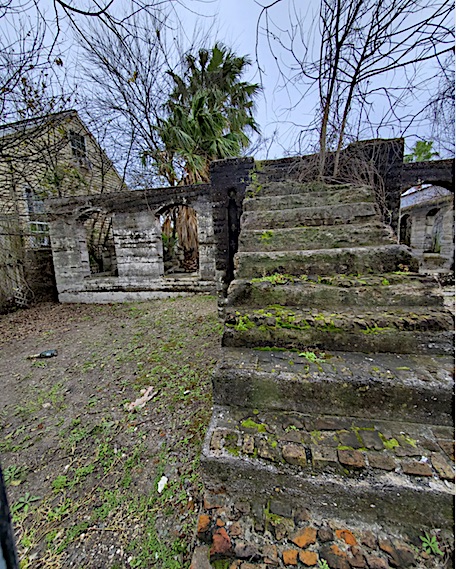 The remains of Lafitte’s home, the Maison Rouge or Red House, can still be seen. A captured ship yielded the red paint used on the façade and it is documented to have had 12 gables, 10-ft. arches, a cannon in the cupola and a substantial exterior staircase, the only remaining portion of the house. After firing on an American ship Lafitte was given 60 days to vacate. He left on March 3, 1821 after burning everything to the ground. The remains of the staircase are on Harborside. 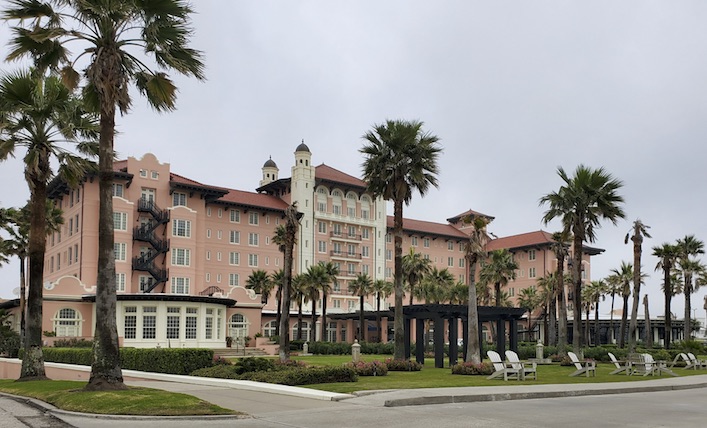 The Maison Rouge is one of the most haunted island locations. People claim to have seen lights, apparitions and have heard sounds. The property’s most ghoulish spirits are said to be a pack of 12 black hellhounds supplied by a voodoo priestess. They were trained to hunt and capture men.
The 1911 Hotel Galvez is believed the most haunted site. It has a number of ghosts and has been featured on television. The 9,328-ft. hotel has 226 rooms and was constructed in a combination Mission and Spanish Revival styles. Once known as the “Vegas of the South,” the hotel played host to presidents and celebrities as well as spirits.
Sister Katherine, a resident spirit, drowned in 1900. She served in an orphanage and when a storm came she and the other Sisters of Charity tied the children to their bodies in hopes of saving them. The nuns and more than 80 children died bound together. It is theorized that she may be buried on the grounds of the hotel.
In 1900 the Great Storm, which was prior to naming storms, was the deadliest natural disaster in our history. The storm killed between 9-12,000 people. The large death toll and diminished population led the people to inter people where they fell, making the island a large burial ground. Many of the structures are built on gravesites. Ghost tours are numerous and thematic. 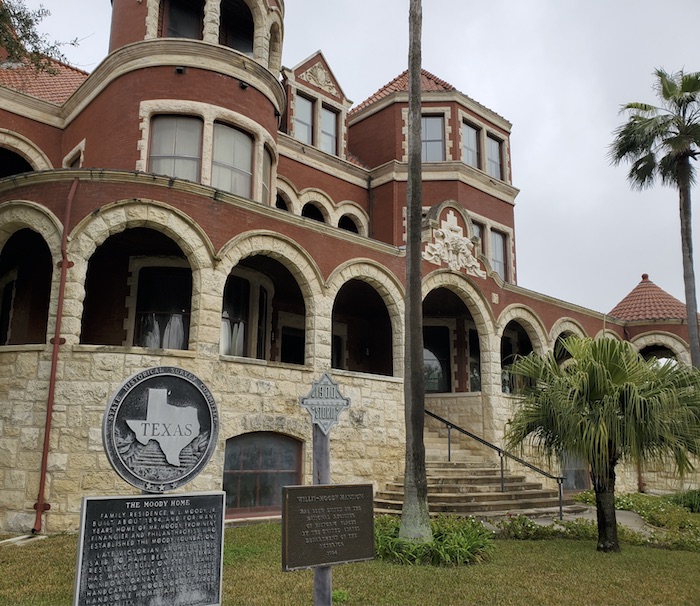 Downtown Galveston encompasses the longest row of historic buildings and one of the largest concentrations of Victorian architecture in America. The Moody and Bishop’s Mansion, both Texas Historic Landmarks, are open for tours and are outstanding architectural examples. The Bishop’s Palace has been listed as one of the most significant buildings in the US.
The Texas Heroes Monument is located near Bishop’s Palace. It was gifted by Henry Rosenberg to commemorate those who participated in the 1836 Texas Revolution. Bronze figures adorn the 72-feet tall monument.
Moody Gardens opened in 1986 with the goal of combining education with enduring lessons on conservation and wildlife. There are three pyramids, the Aquarium, the Rainforest and Discovery, showcasing marine animals, plants, animals, reptiles and science exhibits. The complex also includes a water park, zipline, a 3D theater, golf course, paddlewheel boat and hotel. It is one of the premier destinations in the country.
Bay Tours are offered at Pier 22 along with The Texas Seaport Museum and 1877 Tall Ship Elissa. The 2-story museum relates Texas’ maritime history through photographs and documents. More than 133,000 immigrants entered the country through the Port of Galveston and much of their information is computerized and available in the museum. The port was also one of 48 entry ports for the transatlantic slave trade.

In June 19, 1865 Maj. Gen. Granger issued General Order No. 3 calling for “absolute equality” for the enslaved. This act is commemorated and has been celebrated as Juneteenth from that time. The word is not the deed and troops were sent, 75% were black, to assist in enforcing the order for the 250,000 enslaved in the state. A history trail traces their path in Galveston. The showpiece of the trail is the 5,000-sq, ft. “Absolute Equality” mural. The mural depicts a series of scenes of historical significance.
Galveston is a great destination. Find your bliss on the bay.
www.visitgalveston.com